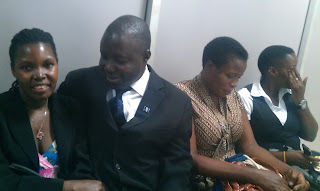 Uhspa Uganda has teamed up with Human Rights Awareness and Promotion Forum ( HRAPF) to contest the unfair treatment of Ugandan homosexuals in the Equal Opportunities Commission Act. The activists seen here last week petitioned the registrar of Uganda's Constitutional Court, challenging a section of the act that bars homosexuals from equal treatment and opportunity. See more Uhspa work on the controversial act here: Uganda’s Constitutional Court Hears Case on Equal Opportunities for All On Monday Uganda’s Constitutional Court opened hearings on a petition, Jjuuko Adrian v. Attorney General of Uganda, Constitutional petition No.1 of 2009, asking to nullify Section 15(6) d of the Equal Opportunities Commission Act 2007. Section 15(6) d can be used to discriminate against LGBTI persons. Adrian Jjuuko, the plaintiff in this case, is the Executive Director of the Human Rights Awareness and Promotion Forum (HRAPF). HRAPF’s mission is to "use the law to promote Human Rights awareness and enforcement" and Jjuuko’s petition challenging the constitutionality of Section 15(6) d of the Equal Opportunities Commission Act of 2007 does just that. The Equal Opportunities Commission was established by Ugandan law to… give effect to the State’s constitutional mandate to eliminate discrimination and inequalities against any individual or group of persons on the ground of sex, age, race, colour, ethnic origin, tribe, birth, creed or religion, health status, social or economic standing, political opinion or disability, and take affirmative action in favour of groups marginalised on the basis of gender, age, disability or any other reason created by history, tradition or custom for the purpose of redressing imbalances which exist against them; and to provide for other related matters. The challenged Section 15(6) d reads: (6) The Commission shall not investigate— (d) any matter involving behaviour which is considered to be— (i) immoral and socially harmful, or (ii) unacceptable, by the majority of the cultural and social communities in Uganda. According to a Behind the Mask report, during the Parliamentary debate about the Equal Opportunities Commission Act of 2007, the Finance Minister specifically said that LGBTI persons should be targeted with this clause. Homosexuals are not mentioned by name as one of the groups in the act, however during the debate to pass the law, the Parliamentary Hansard of December 12, 2006, records Ms Syda Bbumba, the former Finance Minister saying homosexuals should be targeted using the disputed clause. She was supported by other legislators. Hansard is a substantially verbatim report of parliamentary proceedings. “It is very important that we include that clause. This is because the homosexuals and the like have managed to forge their way through in other countries by identifying with minorities,” reads the Hansard entry for the debate, quoting Ms Bbumba. Minorities are not defined in the Constitution of Uganda. However, vulnerable groups have been defined in the National Equal Opportunities Policy of 2006 as categories of people who lack security and susceptible to risk. Mr Jjuko said yesterday that that such a law was not good for human rights in Uganda, and called on all activists to stand and defend the rights of minority groups in Uganda.

Comments:
GOOD DAY AND WELCOME TO STANDARD ONLINE FINANCE LTD
Do you need 100% Finance? I can fix your financial needs with a lower back problem of 3% interest rate. Whatever your circumstances, self employed, retired, have a poor credit rating, we could help. flexible repayment, Contact us at: standardonlineinvestment@gmail.com

Apply now for all types of loans and get money urgently!
* The interest rate is 3%
* Choose between 1 and 30 years of repayment.
* Choose between monthly and annual repayment plan.
* Terms and conditions of the flexibility of loans.