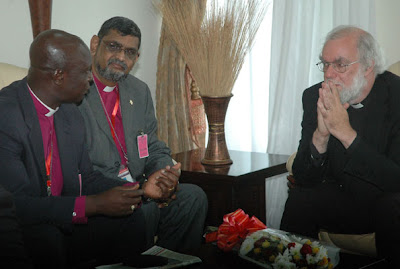 The Archbishop of Canterbury, Rowan Williams (R), meets bishops Ian Ernest of the Province of the Indian Ocean (C) and Nathan Kyamanywa of Bunyoro Kitara Diocese yesterday at Entebbe International Airport. The head of the Anglican Church is here for the All African Bishops International Conference which starts tomorrow in Entebbe

(Monitor Story www.monitor.co.ug)The Archbishop of Canterbury, Dr Rowan Williams, will today meet African bishops, most of whom are unhappy about his perceived tolerance of homosexual behaviour in the Anglican Communion.

Dr Williams, who arrived in the country yesterday, will be the lead preacher at the opening of the All Africa Bishops Conference in Entebbe aimed at fostering unity and breathing life into a Church, the Archbishop of Uganda Luke Orombi, described as “broken”.

400 participants
The leader of the Anglican Church worldwide was received by the Chairman of the Council of Anglican Provinces of Africa (CAPA), Rt. Rev. Ian Ernest and Ugandan bishops Nathan Kyamanywa and George Katwesigye.

Orombi to meet Archbishop of Canterbury over homosexuality
The conference jointly organised by Church of Uganda and CAPA brings together 400 participants. It will be held under the theme “Securing the Future, Unlocking our Potential.”

Archbishop Ernest of the Province of the Indian Ocean described Dr Williams as a symbol of unity in the Anglican Communion that is faced with divisions on the ways and approaches in serving God.

“Despite the tensions surrounding the faith, we are grateful that he accepted our invitation so that we can engage each other,” said Bishop Ernest, adding that they expect him to share and hear from the African clergy.

He, however, explained that the conference, which runs until August 29, will largely focus on the vice of corruption that has infiltrated the congregations and eroded human dignity.

Upon arrival, Dr Williams commended CAPA and the Church of Uganda for inviting him.