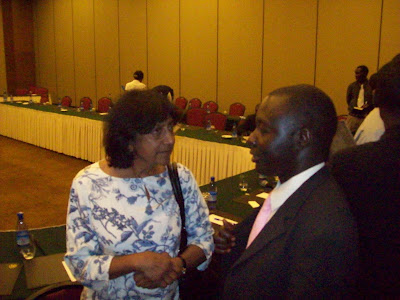 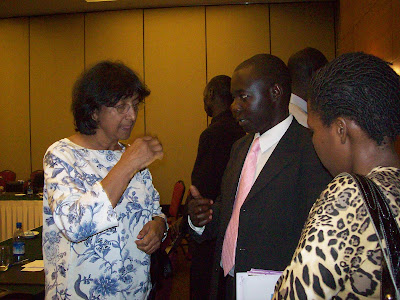 The United Nations Human Rights Commissioner, Ms. Naveneth Pillay(left) , has said her office shall continue to engage the Ugandan government on minority health Rights.
She said during a meeting with UHSPA Executive Director, Mr Kikonyogo Kivumbi, Friday in Kampala that access to treatment is a right every individual should be accorded irrespective of who they are.

She was responding to concerns raised by Mr. Kivumbi about a number of bills and policies being proposed by the Uganda government that discriminates sexual minorities from access to care and treatment. The Anti homosexuality Bill 2009 wants doctors to report gay clients to police within 24 based on information obtained by virtue of their job.

Mr. Kivumbi told the commissioner that Uganda’s new position sitting at the United Nations Human Rights Council should not be used to send the wrong signal to other African countries by enacting laws that suppress minority groups. He cited the Anti Homosexuality Bill 2009, the HIV/ AIDS Control Bill 2010 and the Health Sector Strategic Plan III that undermines the fundamental right of minorities from health.

“We ask your office to prevail over Uganda to permanently shelve the Anti Homosexuality Bill. We are also concerned about the Aids Bill which views minorities as the problem in the HIV pandemic, yet thy are supposed to be partners in the struggle,” Mr. Kivumbi told the commissioner. Uganda was elected May13 to the United Nations Human Rights Council. The HIV Bill was recently tabledin parliament by Ms Beatrice Rwakimari.

Mr. Kivumbi told the Commissioner that although there were composite developments in Uganda to the recognition of some vulnerable groups and identified them as Most at Risk, including sex workers and prisoners, homosexuals were never categorized as a vulnerable group despite their needs to access to treatment and care.

“Currently, we are in advanced stages of drafting a national health delivery policy, the HSSPIII, but LGBTI community is not considered in the current draft of the policy. Sex workers plight was never articulated in HSSPII,” Kivumbi said.

Ms Pillay said she understood there is discrimination of sexual minorities in Uganda by laws on the Penal Code and proposed new legislations. “But I am happy that when I met the Vice President, Prof.GilbertBukenya, he seemed to understand concerns of all groups to access to health. And we shall continue with this engagement tall levels. I think it is by virtual of medical background,” She said.

In a similar development, Ms Macklean Kyomya, the Director of Sex Workers Rights Organization, Wonetha, told Ms Pillay that sex workers in Uganda continue to be intimidated and targeted by laws that see them as a burden, rather than helping them. She cited the HIV Bill which mentions sex workers by name, suggesting them are the problem in the spread of HIV in the country.

“These are invisible women. We need to help them, not condemn them,” Macklean said.

Ms Pillay said the issue of sexual minorities and the plight of Human Rights Defenders shall “feature prominently in future engagements with Ugandan government.”

Staff of the Uganda Office of High Commissioner for Homan Rightsattended.
Ends