Honey moon is over: HIV/AIDS Control Bill is back 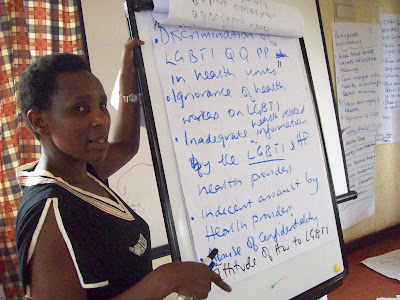 ACTIVIST FLAVIA KYOMUKAMA TRAINING LGBTIS ON HEALTH LOBBYING DURING UHSPA WORKSHOP
A motion moved on October 25,2011 to resurrect all bills that were shelved in the 8th Parliament means that the HIV/AIDS Control Bill is coming back and will be read for the first time in the 9th parliament for the first time before christmas break. But we are ready. We have recently been training each other on advanced lobbying

What we did in the eighth parliament (flash back)

Friends of Uhspa Uganda recently held a party to celebrate the intensive lobbying efforts for the last one year that yielded in the Parliament of Uganda dropping the HIV/AIDS Control Bill 2010, which alienated LGBTI rights to health as a Public Health Right. The Party held at Uhspa office gardens was wow!!. Mr Kikonyogo Kivumbi, the Uhspa Director and Ms Prossy Ssonko, a Board Member and Treassurer thanked the members and partners for the continued partnership to address unfair legislations.

Mr. Kikonyogo said the expiry of the HIV Bill with the 8th Parliament on April 13,2011 was commendable, and thanked all the Kuchus who turned up to take the petition and memorundum containing the views of LGBTI community to the Parliamentary Social Services Committee on April 8,2011.

He said LGBTIs are the only Ugandans who have no right to Post Exposure Prophylaxis because medical health workers and the police ask them funny questions when they seek assiatance. He said the achievement gave time to the activists to restrategise for the possible reintroduction of the bill in the 9th Parliament of Uganda.

Ms. Sonko said there was a need to celebrate the good working relationship among activists,unity and the courage that had yielded into pressure on the Parliament to drop the Bill.
She said Uhspa's position on criminalisation, and discrimination in access to treatment on the basis of sexual orientation had no place among civilised global society.

Kill the gays bill is back 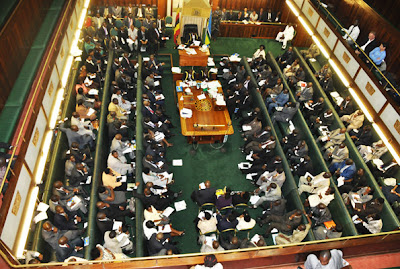 A Ugandan army officer has successfully brought a motion in Parliament which will have the Anti Homosexuality Bill 2009 re-tabled, without having to consult Cabinet

The officer, Sarah Mpaabwa, an army representative in Parliament said all bills and reports that were shelved in Uganda’s eighth Parliament should be saved and re-tabled for discussion.

The passing of the motion means that David Bahati, the legislator who tabled the globally infamous “kill the gays” bill will not require Cabinet’s approval to table the anti-homosexual bill again.

The Ugandan Cabinet recently said that it had rejected the bill, tabled by as private member’s bill. But Bahati quickly reminded Cabinet that they had no powers over his bill, because it was a property of the Parliament of Uganda, and not the Executive.

Under normal rules of procedure, Bahati should have presented his bill to cabinet first, and also to the Ministry of Finance to obtain a certificate of financial implications of what it can cost government is the bill is passed into law, before a re-tabling.

Stephen Tashobya, Chairperson of Uganda’s Legal and Parliamentary Affairs Committee, told Behind the Mask on Wednesday October 26 that Parliament will soon meet to consider when to draw an order of schedule in which bills left-over from the previous Parliament will be a priority for the executive.

He could not however say whether the Bahati bill is a priority for the executive. He said, “All bills from the previous parliament shall continue, without going back to the executive for re-introduction.”

He added, “Then what will follow is a meeting of the business committee to draw the agenda and prioritise which bills to discuss, depending on the priority needs of the executive.”

A member of gay rights group, Uhspa Uganda attached to the Parliamentary Press said on condition of anonymity that the motion means that respective line ministers will re-table the bills so that reports and recommendations from the work of committees from the previous parliament work as working documents, without repeating what has already been covered by Parliament as an institution.

He declined to give a time frame within which the business committee shall meet.

A number of bills were shelved in the last parliament including the HIV/Aids Control Bill 2010, the Anti Counterfeit Bill and the Anti Homosexuality Bill amongst others. 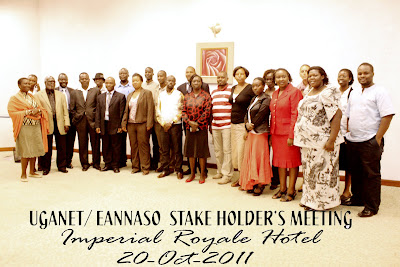 Gay rights activists in Uganda have started consultations with HIV/Aids and human rights organisations about the proposed East African Community HIV and Aids Prevention and Management Bill, 2010. The activists have been spurred by the fact that the East African Community Council (EAC) of Legal and Judicial Affairs will be meeting next week to develop opinion on the gay friendly East African HIV/Aids bill and advise their home governments.

The meeting taking place in Arusha, Tanzania will be attended by the Attorneys General and Justice Ministers of the five East African Community member countries of Uganda, Kenya, Tanzania, Rwanda and Burundi.

The outcomes shall set discussions for the EAC Council of Ministers set for the second week of November which will be attended by amongst others Uganda’s Minister for EAC Eriya Kategaya. The ministers will be expected to make executive recommendations to the bill which will be tabled in March 2012.

Julius Sabuni, a member of the Eastern African National Networks of Aids Service Organisations, a consortium of regional national organisations said on Thursday in Kampala that activists from the region should get ready for the processes to influence a positive agenda.

He said when the bill is adopted and passed by the five countries, it will take precedence over national HIV/Aids legal frameworks.

For this to happen though, Kabumba Busingye, a Ugandan lecturer of law and gay rights advocate said national parliaments will have to ratify the East African bill and synchronise it with local law.

He said as the bill is gay rights friendly, activists in Uganda should engage in advocacy to ensure that Uganda is able to agree to the bill, but also ratify it when it is tabled next year. Kabumba said gay activists should ensure Uganda does not oppose the gay text in the bill.

Mary Kamukama, an activist with the Ugandan Health Rights Action Group warned, “We should be careful here. Uganda is fond of partial ratification of laws in East Africa, say the customs Union. We need to ensure criminalization we oppose in Ugandan HIV bill is ratified by Ugandan Parliament when finally adopted.”

The gay activists are spearheaded by Uhspa Uganda together with the Uganda Civil Society Coalition on Human Rights and Constitutional Law, a grouping of 33 gay friendly activists and organisations.

The position they agree on will be presented to Ugandan Minister or East African Cooperation and Uganda’s legislators at the East African Assembly in Arusha.

A copy of the draft bill obtained by Behind the Mask indicates that the five member countries of the block want to drop criminalization of HIV/Aids spread in their country specific laws, while adopting a human rights based approach to fighting the pandemic.

The proposed bill will synchronize a regional approach to HIV/Aids programming. Mr Sabuni said he was happy that although the bill was initially proposed by CSOs in the region, it has been picked up by the executive in the regional governments.

The proposed non-criminalization of HIV/Aids and fostering provision of information to all people in the region, without any discrimination has won the hearts of some HIV/Aids activists and lobby groups in Uganda.

The Ugandan HIV Bill expired in the last Parliament, but is likely to be tabled again before Parliament breaks off for the Christmas holiday this year.

Gay activists, HIV/Aids and human rights groups are looking at the East African HIV Bill critically as it will have over bearing influence on the Ugandan HIV Bill when it comes to Parliament for debate.

Dorah Kyomukama, the Executive Director of Uganda Network on Law, on Law and Ethics said the bill was good for Uganda, especially removing criminalization in national legal frameworks.

Prossy Ssonko, a board member of LGBTI lobby group, Uhspa Uganda said, “The language of the bill seems promising to gay rights to health.”

She added that the bill has a likelihood that homosexuals will be included in information sharing, and access to vital supplies for HIV prevention, care, support and treatment.

Ssonko said “But the language is still vague. All LGBTI activists in the East African region need to take interest in the bill to make the language gay specific and friendly.”

Part of the bill refers to how vulnerable and marginalized groups will be reached if the bill is passed. It reads in part, “Vulnerable or marginalized groups in relation to HIV and Aids, means any group whose members may have special needs or may experience poorer outcomes if their needs are not specially addressed and includes persons with disabilities, children, women and girls, persons engaging in any form of consensual sexual conduct that is risky or that is prohibited by or under any law, injecting drug users, refugees, immigrants, prisoners, internally displaced persons and mobile populations.”