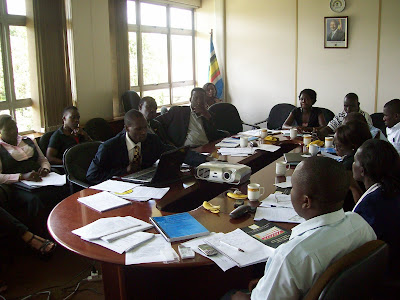 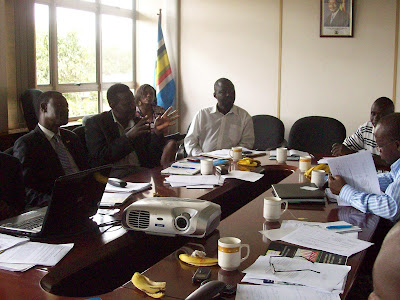 In a rare change of heart, the government of Uganda has appointed Uhspa-Uganda to a high profile committee on streamling Health,Human Rights and Gender Rights within Uganda's Public Health Policies and Laws. The committee sitting at Ministry of Health Headquarters brings together a cross section of government institutions and activists. 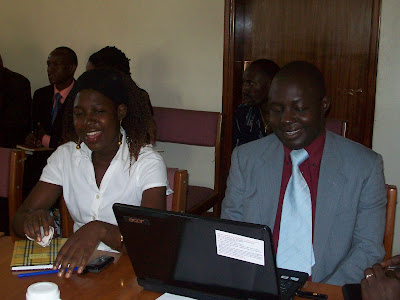 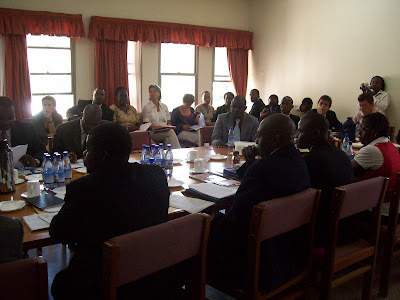 UHSPA Executive Director, Kikonyogo Kivumbi and Lobby officer, Ms Hasifa Nakiganda told Ugandan Legislators sitting on the Legal and Parliamentary Committee of Ugandan Parliament that the Anti Homosexuality Bill 2009 introduced in Parliament by Hon. David Bahati undermines efforts in access to HIV Programming by LGBTI people in Uganda as a public health right enshrined in the International Covenant on Economic Social and Cultural Right to which Uganda is a signatory.
While appearing before the committee on April 12,2011 at Parliament House in Kampala, Mr Kikonyogo said Uganda risked creating a briding population of new infections if LGBTI people were intentionally kept off the health access radar on the basis of their sexual orientation.

Ms Nakiganda said since the bill was introduced in Parliament, with clauses requiring medical doctors to report their gay clients, by virtue of information coming to their knowldge in the course of their job, there is a sharp decline in many gay people seeking treatment. The bill expired with the 8th Parliament when the new Presidential and Parliamentary Term started after elections. But anti gay activists are scheming for its reintroduction in the 9th Parliament. 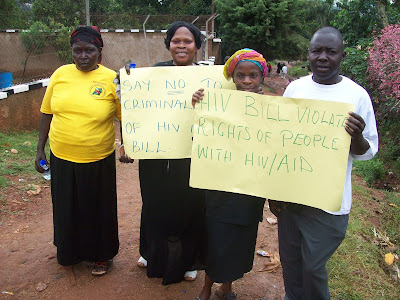 Earlier campaign:Uhspa members and partners demonstrate through Kawempe division,opposing the HIV/AIDS criminalisation law on Dec1,2010.
Friends of Uhspa Uganda recently held a party to celebrate the intensive lobbying efforts for the last one year that yielded in the Parliament of Uganda dropping the HIV/AIDS Control Bill 2010, which alienated LGBTI rights to health as a Public Health Right. The Party held at Uhspa office gardens was wow!!. Mr Kikonyogo Kivumbi, the Uhspa Director and Ms Prossy Ssonko, a Board Member and Treassurer thanked the members and partners for the continued partnership to address unfair legislations.

Mr. Kikonyogo said the expiry of the HIV Bill with the 8th Parliament on April 13,2011 was commendable, and thanked all the Kuchus who turned up to take the petition and memorundum containing the views of LGBTI community to the Parliamentary Social Services Committee on April 8,2011.

He said LGBTIs are the only Ugandans who have no right to Post Exposure Prophylaxis because medical health workers and the police ask them funny questions when they seek assiatance. He said the achievement gave time to the activists to restrategise for the possible reintroduction of the bill in the 9th Parliament of Uganda.

Ms. Sonko said there was a need to celebrate the good working relationship among activists,unity and the courage that had yielded into pressure on the Parliament to drop the Bill.
She said Uhspa's position on criminalisation, and discrimination in access to treatment on the basis of sexual orientation had no place among civilised global society.