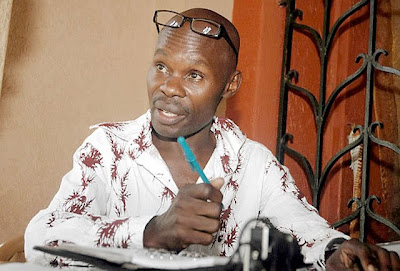 Fare the Well.
Now that he is dead,having been a gay rights activists are you happy!
Are you any happier
Are you rejoicing
I see Kampala is full of the same amounts of dust,choking all of us' noses,are you any happier?

Is the air you breath, any cleaner now that a gay man is dead
Look at the filth, along Kampala road, and piles of garbage, is the smell you get now any better than living gays, because one of them is dead?
Is your God, you accuse of hating gays, any happier
Hippocrites!
Bundled in insanity and wizardly, on a hunting spree to kill whoever cross their way-their blood stained paths

The hate speeches you make;
are you now proud,
Are your venomous tongues dilluting hot pepper to add to your hatrade speech
This life shall continue to live. David Kato Lives
Fare the Well 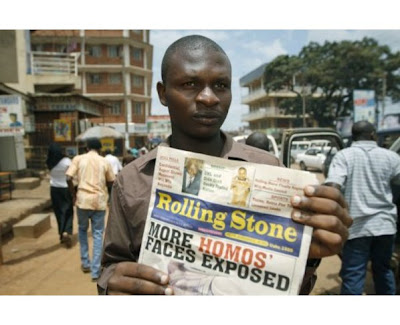 The case relates to an article that was published on October 2 in Rolling Stone, a weekly Ugandan magazine that has no relation to the US publication of the same title.

The article in question, which was part of a series that the magazine was running, carried the headline “Hang Them” above a list of names and photos of people it accused of being gay. Other details were also published about some of those named, including an indication of the area in which they lived.

Following publication of the story, three of those named – Kasha Jacqueline, David Kato and Onziema Patience – decided to sue the newspaper for damages, arguing that their lives had been put at risk by an apparent call for vigilante justice to be carried out.

On January 3, the High Court in Kampala ruled that the constitutional rights of the plaintiffs had been violated – awarding each 1.5 million Ugandan shillings (649 United States dollars) – and issued an injunction prohibiting the publication of the identities and addresses of homosexuals.

Giles Muhame, the editor of Rolling Stone, denied that he was using his magazine to incite violence, and said that he would continue his campaign against homosexuals. He said that the apparent increase in gay activism in the country was a sign that the days of homosexuality were coming to an end.

“You know the noise that a chicken makes when a kite has snatched its chicks? This is it,” he said.

Oloka-Onyango, the director of the Human Rights and Peace Centre at the Faculty of Law at Maekerere University in Kampala, said the ruling was a victory for human rights.

“This ruling serves as an important warning to anyone – be they minister, pastor or boda-boda [motorbike taxi] driver – who believes that they can abuse, or threaten to abuse, the fundamental rights of fellow citizens with impunity,” he said. “It also serves as a wake-up call to media houses that are making a mockery of the principles of freedom of speech and responsible reporting.”

Significantly, though, the ruling made a point of stressing that the decision reached made no pronouncement whatsoever on the legality of homosexuality, which remains a crime under Ugandan law.

“It must be noted that this application is not about homosexuality per se,” the ruling said. “It is about fundamental rights and freedoms.”

David Kato, one of the plaintiffs, said that he had been living in terror ever since he was named by the newspaper.

“Since we got exposed by Rolling Stone, we have been living like fugitives in our own country,” he said. “We have to keep shifting houses for fear of being attacked. Some of the gays have decided to leave the city and head to rural areas in order to protect themselves.”

Human rights lawyers say that mob justice meted out against suspected gays is fairly common. Just before Christmas, two alleged gay men were attacked by a mob at Maekerere University in Kampala. The gay men were subsequently arrested, and they are now waiting to hear whether formal charges will be brought against them.

John Francis Onyango, the lawyer representing the two men, said, “The two were found together at Makerere University. A fellow student alleged they were homosexuals and, as a result of this, a mob beat them. One of the men was badly injured, but the police came and rescued them. Both men have now been released on police bond.”

Onyango explains that many people in Uganda regard homosexuality as something that has been imported from the West, even though many of those suspected of being gay have had very little contact with people outside of Uganda.

While the High Court ruling may not afford additional protection to those that have already been named as gay, the hope is that the injunction against Rolling Stone magazine will prevent similar anti-gay campaigns in the future.

The Rolling Stone story is not the first time that a Ugandan publication has outed homosexuals in the country.

Unlike in the Rolling Stone case, the newspaper was never sued, but following the publication there were widespread reports of the named individuals being threatened and harassed.

“I certainly think that the [Rolling Stone] ruling is an important step,” said Maria Burnett, Human Rights Watch’s Ugandan researcher. “This is the first time that we’ve seen the courts support civil action to protect the rights of a sexual minority.”

Burnett believes that the ruling will help to curb other publications who may be tempted to run such extreme headlines in order to increase their circulation, but she does not think it fundamentally changes gay rights in the country.

“As for the extent to which the ruling will radically change the profound homophobia that has gripped the country, that will be another matter,” she said. “I think there is still a long battle ahead to afford sexual minorities in Uganda adequate protection.”

Of particular concern for gays living in the country is the anti-homosexual bill, which is still under discussion by the Ugandan parliament.

There has been some speculation that two of the more controversial elements of the bill – the use of the death penalty in certain circumstances and penalties for those who do not report homosexuals to the police – will be dropped in the final version.

However, some commentators have suggested that, paradoxically, the Rolling Stone ruling could give rise to calls for the bill to be even tougher.

Jim Burroway, American gay activist and blogger, points out that it was in actual fact a ruling in favour of the homosexual community in late 2008 that initially prompted the current anti-gay bill.

The case related to Ivan Oyo and Victor Juliet Mukasa, who were arrested by police on suspicion of being gay. The two claimed that they were tortured by the police and that officers had raided their home without an arrest warrant.

“I think, after the case, many people were frustrated that the bar was set too high, for both arrest and prosecution,” Burroway said. “That’s part of the reason why this [anti-gay] bill came about, to make it easier to arrest gay and lesbian Ugandans and imprison them for life.

“Within the bill, the definition of homosexuality has been reduced down to where it could just be two people touching each other, even through their clothing.”

Burroway thinks that a similar hardening of attitudes could happen in the wake of the Rolling Stone case.

John Bosco, a 40-year-old gay Ugandan man currently living in Portsmouth in the United Kingdom, knows from first-hand experience what a powerful impact the media can have on the rights and freedom of gays.

Bosco was forced to flee Uganda in 2001, during a particularly strong crackdown on homosexuals.

His name was given to the authorities by friends of his, whom he claims were tortured. The police went to his mother’s house, and questioned friends and relatives about Bosco’s whereabouts.

Using a combination of contacts and bribes, Bosco managed to evade the authorities and slip out of the country. He ended up in the UK, where he spent the following seven years in detention centres.

In 2008, though, the British immigration department decided to deport Bosco back to Uganda. That was when things became even worse for him.

“At the time of my deportation, my case was receiving a lot of attention,” Bosco said. “The Ugandan New Vision even published my picture on its front page. So, when I came back to the country, everybody knew who I was. I was really scared. I didn’t know what would happen to me. Already then they were talking about a new anti-homosexual bill and about killing gay people.”

Bosco was arrested when he arrived at the airport.

“The first thing [the police] said to me was, ‘Oh, you’re that gay person who stupidly copies European culture. We don’t want that thing here in Uganda so we’re going to arrest you’,” he said.

In March 2009, Bosco was allowed back to the UK, following a court ruling that Britain’s immigration authorities had failed to provide him with adequate legal advice prior to his removal. He has now won asylum.

Bosco says that he knows a lot of others who have experienced similar ordeals, either being arrested and sometimes tortured by the police or threatened by community members.

“I want so much to go home to Uganda, as long as there is freedom in the country and I can be who I am,” he said. “In [the UK], I don’t have any relatives or anybody close to me. During the Christmas holidays, people go and see their families. People talk about their families. I have nothing.”

Bosco welcomes the court ruling in the Rolling Stone case, but doesn’t think it changes very much.

“It might prevent publication of similar stories, but it won’t stop people being arrested for being gay,” he said. “The anti-gay bill is still going on. If they are not against gay people, why are they going ahead with the bill?”